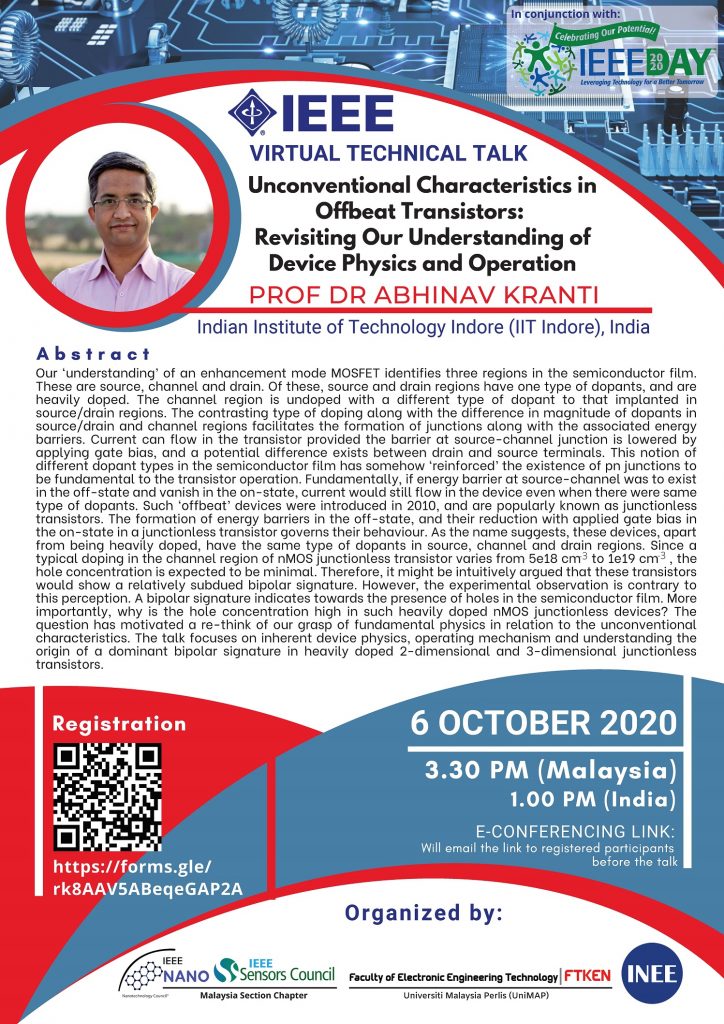 Our ‘understanding’ of an enhancement mode MOSFET identifies three regions in the semiconductor film. These are source, channel and drain. Of these, source and drain regions have one type of dopants, and are heavily doped. The channel region is undoped with a different type of dopant to that implanted in source/drain regions. The contrasting type of doping along with the difference in magnitude of dopants in source/drain and channel regions facilitates the formation of junctions along with the associated energy barriers. Current can flow in the transistor provided the barrier at source-channel junction is lowered by applying gate bias, and a potential difference exists between drain and source terminals. This notion of different dopant types in the semiconductor film has somehow ‘reinforced’ the existence of pn junctions to be fundamental to the transistor operation.

Fundamentally, if energy barrier at source-channel was to exist in the off-state and vanish in the on-state, current would still flow in the device even when there were same type of dopants. Such ‘offbeat’ devices were introduced in 2010, and are popularly known as junctionless transistors. The formation of energy barriers in the off-state, and their reduction with applied gate bias in the on-state in a junctionless transistor governs their behaviour.

As the name suggests, these devices, apart from being heavily doped, have the same type of dopants in source, channel and drain regions. Since a typical doping in the channel region of nMOS junctionless transistor varies from 5e18 cm to 1e19 cm , the hole concentration is expected to be minimal. Therefore, it might be intuitively argued that these transistors would show a relatively subdued bipolar signature. However, the experimental observation is contrary to this perception. A bipolar signature indicates towards the presence of holes in the semiconductor film. More importantly, why is the hole concentration high in such heavily doped nMOS junctionless devices? The question has motivated a re-think of our grasp of fundamental physics in relation to the unconventional characteristics.

The talk focuses on inherent device physics, operating mechanism and understanding the origin of a dominant bipolar signature in heavily doped 2-dimensional and 3-dimensional junctionless transistors.